RandallButh wrote:
You are on the right track with ‘topicalization’. The WS participial clause has fronting for contextualization, but with καινήν left behind in its default saliency position. Sort of like volunteering in an army joke where everyone steps backward, leaving the volunteer “forward”. (In the language, though, moving foward was a ‘demotion of saliency’/orientation/contextualization/topicatlization, and corresponds to moving backward in the joke.) The ἐντολή object was topicalized and the σοι was dragged along by the verb, as two sub-units within the clause. Maybe even the γράφων σοι can be said to be heightened pragmatically for contextualization in this case by its attraction of σοι.

Thanks for that. I like the idea that the whole part οὐχ ὡς ἐντολὴν γράφων σοι is “topicalized” or “contextualized” and your explanation thereof. I’m not so sure about the reason for the placement of σοι, though, as I don’t see any pragmatical heightening of that element. If I understand Devine and Stephens’ work on the phonetics of the Greek accent correctly, there should be a (pitch) peak at γράφων here — even though it may not be pragmatically prominent.

I’m currently testing a hypothesis that clausal clitics in Koine need to be hosted by the first accentual peak in their intonation unit, so maybe that is why σοι is hosted by this element since the grave accent on ἐντολὴν won’t produce a peak according to D&S. (Of course, if Koine isn’t tonal or if D&S’s work on intonation isn’t applicable to the Koine of 2 John, then this whole line of investigation could be wrong-headed.) There is some flexibility in that οὐχ ὡς ἐντολήν σοι γράφων also fits the hypothesized rule, so this choice would still need to be accounted for, but I think this would have to involve extra heightening on (οὐχ ὡς) ἐντολήν to move σοι from its default / base-generated position, a heightening that does not seem contextually appropriate here.

RandallButh wrote:
I would expect all of this to have been instantly communicated in antiquity through intonation by a good reader or speaker. The frontings would not have had any focal intonation, perhaps generating a kind of residual/latent/secondary focal intonation on the default yet salient καινἠν.

Yeah, that’s the kind of thing I’m exploring and whether there is independent evidence for it in the intonation system as investigated by D&S. In particular, I would be especially interested in instances of fronted lexical graves that are not topics. 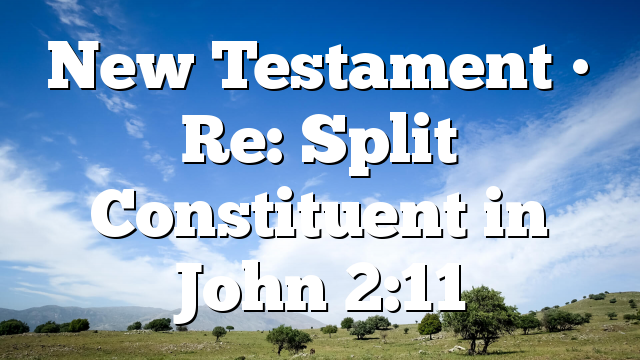 Stephen, are you familiar with Raymond Brown’s 1978 book, The Community of the Beloved Disciple? It’s speculative, to be sure, but he argues that the Johannine community developed separately from the apostolic church but merged with it toward the end of the first century, at which point the Johannine community suffered a schism in which a “Gnostic-like” majority group walked out “into the world”. Brown’s proposition is that the Johannine epistles are intended to point the right understanding of the Johannine gospel and to warn against the schismatic group, the second and third letters focusing more on those in the schismatic group. That, at least, is my recollection of it, but something like that must be involved in these letters.

David Lim wrote:Like Carl, I take “δια την αληθειαν” to modify “αγαπω”. If I were to give a reason it would be that it is an adverbial prepositional phrase and must modify a verb form, and the nearest one that fits would be “αγαπω” (not “εγνωκοτες”).

Well, there are three possible verbal forms to pick from in order of proximity, ἐγνωκότες, ἀγαπῶ, and the implied γράφει/γράφω. I don’t quite see how it fits better with ἀγαπῶ than with γράφω, however. I can see how giving a reason fits better with writing than with loving, but how would it work with your option: I love you in truth on account of the truth abiding in us? Please explain this further.

I think my explanation wasn’t clear enough. I took “the truth that remains in us” to refer to “the instruction (singular abstract noun) from God that remains in us”, which includes the laws, teachings, revelations, … In the writer’s views, it is natural for anyone, not just him, who loves the laws and teachings of God, to also love “the chosen lady”, and it is not just any type of love (which may be based on many things) but love that is based on truth. What it means for love to be based on truth is explained by the writer later, that it is a very logical thing (now this is going to be slightly interpretive):
[1 John 4:21] and this commandment we have from him: that the [one] who loves God is to love also his brother.
[1 John 5:2] in this we know that we love the children of God: when we love God and keep his commandments.
In the first statement he says that to love his brothers (including the chosen lady) is actually a commandment from God (which is part of “the truth”).
In the second statement he says that by loving God and keeping his commandments we love the children of God, which is a natural consequence of the first statement.
This is the way the love is “because of the truth”.

David Lim wrote:I would take it to be a separate statement, with the focus on the whole “μεθ ημων εις τον αιωνα”. But I’m curious as to the suggested possibility that “εσται” represents the future participle; are there any examples you know that indicate the existence of such a phenomenon of finite verbs that seem to take the place of participles?

The statement about “focus” is confusing, because it is a technical term (where only μεθ’ ἡμῶν is in focus, based on fronting: the whole statement is not focus). As for the other issues, there is a certain parallelism between stating that the truth abides within us and then asserting that it will be with us forever. The parallelism of thought, however, is broken by the switch from participle to finite verb form. As you know, participles often do the work of finite verbs.

Indeed participles can easily take the place of finite verbs in various ways, but I understood you (and I think Carl also) to mean that “εσται” functions as a participle, which is the reverse direction. For that I would like to see some examples if you know of any.

David Lim wrote:I understand “εν αληθεια” similarly as “in truth” (“according to what is true”), while “η αληθεια” here refers to “the truth” (“the commandments/teachings/revelations from God”). The former is indefinite, which is why it is the latter that is described as “remaining in us”. Of course, in this context the former implicitly refers to the latter; “it is because of the instruction from God that we keep in our hearts, which is truth, that we love the chosen lady, and not just I but also all the ones who have received this instruction, and this instruction will remain with us for ever.”

This explanation is a little confusing if not contradictory, because it is asserted that the former is indefinite but also that it refers to something identifiable. How can it be both? At any rate, I was thinking about the NET Bible’s note on the former:

The prepositional phrase ἐν ἀληθείᾳ (en alhqeia) in 2 John 1 is similar to 3 John 1, although it is not qualified there as it is here (see 3 John 1). This is not merely the equivalent of an adverb (“truly”), but is a theological statement affirming the orthodoxy of Gaius, to whom the letter is addressed. “Truth” is the author’s way of alluding to theological orthodoxy in the face of the challenge by the opponents (see 1 John 3:19).

Aside from the confusion over which of the little Johns is addressed to Gaius, they take the phrase ἐν ἀληθείᾳ not be merely adverbial but a reference to orthodoxy. I think you’re doing similar but also trying to have the adverbial usage too?

I do take it as adverbial, but I think it remains an indefinite reference. It is possible for an indefinite reference and a definite reference to refer to essentially the same thing because of the context, though in general it is not the case. For example, we can say “God has power.”, where “power” is indefinite in the sentence itself. At the same time “the power of God” is definite. In the former, we could argue that the indefinite “power” refers to power in general that others may also have, but it is also true that in such contexts we are usually talking about God’s power and not about power in general, so in the end it refers indirectly to the same as the definite reference. In the same way, the indefinite “truth” in “in truth” refers to truth in general, which is why I tried to explain the phrase as “according to what is true” to bring out the indefiniteness. Of course, the context tells us that the writer is not just talking about doing things according to what is true in general, but doing things according to a specific “truth” which appears to refer to “instruction from God”. 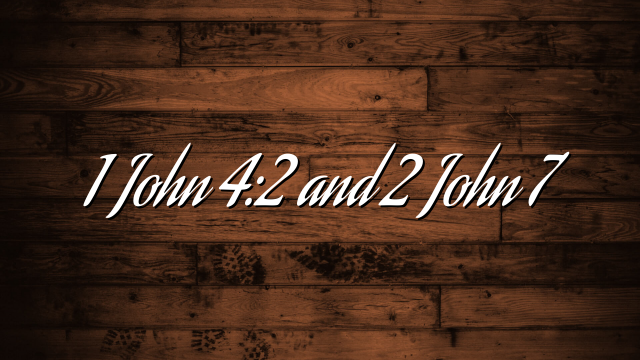